Horse racing has always been in it’s own little corner for sports movies. From Seabiscuit, Lean on Pete, National Velvet, and most recently Dream Horse, there is often a romantic lens to what it takes for a horse and the person that rides them to achieve greatness. That same approach is there from Clint Bentley in his new original film Jockey, which plays like a close relative to Chloe Zhao’s award winning film The Rider, only this time the focus becomes about the mental spirit of an aging horse jockey, looking to find a few good years in the sport that has become his reason of existence. Led by a career defining performance by Clifton Collins Jr, Jockey may be a mere minor story on the surface, but underneath is the heart and soul of what it takes to succeed in horse racing. It’s the human on the horse that makes Jockey an emotional ride.

The story begins with Jackson Silva (Collins Jr.), where he’s running late to a meeting, he’s not going to meet with an AA group, but it’s actually a meeting for jockeys, sharing stories about how they have recovered from their traumatic injuries. For Silva, he has a rolodex of stories to tell, considered one of the veterans of the group, and he’s still trying to reach for the glory of victory. His stable coach is Ruth (Molly Parker), a friend, possible romantic interest, and between the two of them they have won plenty of races. When Ruth shows a new mare to race with, a hidden gem, Silva believes he has a new start. Coincidentally, Gabriel (Moises Arias) is a young jockey, trying to make it onto a horse, but when he arrives he also reveals to Silva that he might be his son. This is where the internal struggle arrives, where Jackson finds purpose in his relationship with Gabriel, while fighting lingering ailments, and trying to win again.

As many critics have focused on already, it’s the performance from Collins Jr. that raises Jockey to a high level. The screenplay, co-written by Bentley and Greg Kwedar, understands how to balance the human side of the story. In fact they make the bold decision of never showing a single horse race, often keeping the camera on the shoulder of the horse, and letting the emotions rise after the fact. The other two performances are both on their own level, not having as much material as Collins Jr, but still bringing a unique look to the other parts of the sport. Ruth loves and cares for Silva, but she still has a business to run, horses to train, and money to make. Gabriel is lost and in him we see what might be a window to who Silva was when he got his start. The third act of Jockey becomes a matter of reflections, where the battered down jockey is a warning to the younger buck, and it’s also an image for Silva of an alternate reality that he may have missed out on.

The minor issues with Jockey consist of its similarities to other movies like this. There could have been a bigger arc to the story, which ends a bit on a whimper, and not on a bang. It’s that fine line the story rides on from Bentley, which sacrifices sports cliches for independent drama cliches. The Rider was visually stunning, capturing multiple sunsets that could make you weep, and submerging us into the life of the lead character. Much of that can also be appreciated in Jockey. The cinematography from Adolpho Veloso does capture those sunsets, but also closes in tight on Collins Jr. because it’s his character’s journey that drives the horse.

Ultimately Jockey has all the check marks for what makes an independent movie succeed. It’s a more subdued approach and different plot points, but also similar to The Novice, which deals with competitors driving themselves against their own personal health. But it does have a great lead performance, various conflicts that make a story brim with emotions, and a willingness to deliver results that an audience could never predict. I love a movie like this and it makes it easy to bet on Jockey.

JOCKEY IS CURRENTLY AVAILABLE ON DEMAND AND PLAYING IN SELECT THEATERS. 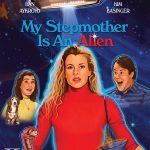 My Stepmother is an Alien- Arrow Video Blu-Ray ReviewReviews