Who says you can’t make a western in the 21st century? What if I told you, that Hell or High Water was the best modern day western since, oh I don’t know, Unforgiven? Now some will say that I am overrating this, especially compared to early opinions from my peers at the Cannes film festival, which are positive reviews, but likely not with the same level of praise I am about to give. I do believe though, that time will be good to Hell or High Water. It is the newest film from director David Mackenzie (Starred Up) and penned by Sicario writer Taylor Sheridan. This is a pressure cooker-of a film, about two men robbing small town banks in Texas, while a pair of rangers, lead by Jeff Bridges, are hot on their heels. Its high drama, along the lone star plains, and happens to be one of the best movies of 2016.

The film opens with a tone setting robbery of a Texas Midlands Bank. Toby (Chris Pine) and Tanner (Ben Foster) are brothers, and it does not take long to realize that these men are wild, but calculated outlaws, fully committed to their criminal acts. They arrive equipped with guns and wearing ski masks to conceal their identity, before speeding off and smoothly evading local authorities to their childhood home, where they bury the getaway car. Steal, bury car, repeat- that’s the plan of survival, while getting some revenge on the corporate banks that bleed middle class folks in the process.

The relationship between the brothers captures the complexities of family. Toby has designed the plan, which is to rob from the banks in order to pay off the mortgage on his ranch, and eventually, his sons can inherit the oil swelled land. Tanner tags along out of loyalty. His prospects aren’t high, after spending 7 years in prison, which is why his ice cold veins make him a loose cannon, but just crazy enough to be fully committed to their goal. When you have nothing to lose, bank robbing comes easy. Their connection is paralleled with the friendship of the two rangers hunting these men down- a southern drawled, soon to be retired Sheriff Marcus Hamilton (Bridges) and his tall as a mountain, half-indian partner Alberto Parker (Gil Birmingham). It’s a chess match, between the bond made among men, who represent the long arm of the law and two men who’ll do anything for their kinfolk.

Chris Pine has always had the looks to be the face of Star Trek, but has often searched for a role to define him as an actor. As Toby, I believe he has found it here. His performance carries the weight of a man who dealt with watching his mother die, and a pattern of poor past decisions. He sports a Texas sized mustache, and walks with a swagger resembling a young Robert Mitchum. Ben Foster may be saddled with a history of playing the loose cannon role, but his Tanner is perfectly unhinged with an on and off switch. He’s not insane, but he’s also not the guy to mess with. And then there is Jeff Bridges. The 66 year-old veteran certainly knows how to pick ’em. His comedic timing with the words of Sheridan’s script is masterful. He is never truly playing a character, but playing a man who has lived like a tumbleweed, rolling along a prosperous and wise life. Nobody could do better.

The rest of the praise belongs to Mackenzie, with his cinematographer Giles Nuttgens (God Help the Girl) behind the camera. Together, they have created a film that looks like a sun soaked day, capturing beautiful aerial shots of the golden flat lands of Texas. It’s the kind of film where you can taste the beer suds when characters share a drink on the porch. As the two rangers go from a tiny diner to the next bank after the Howard boys hit it up, we meet a cavalcade of townspeople, from a sharp-tongued, older waitress, to an old-timer who can’t understand “why would anyone rob a bank in this day and age?” Each one of them represent America more than a census poll. They are the heartland and the people whose voice is affected by the economy that Mackenzie so accurately portrays.

What it boils down to, is that Hell or High Water rises to the top, becoming a wild west masterpiece. I was giddy to see how Mackenzie draws from classics of the past by creating mirror images of films, such as John Ford’s My Darling Clementine, while mixing a bit of No Country for Old Men meeting The Big Short. There are subtle hints from Mackenzie poking into the ever present gun debate in this country. Yes, there are shootouts, and as each round takes another life, it’s only a reminder that you may have a gun for protection, but you can’t protect yourself from something you don’t see coming. That’s an issue for another time, just make sure you go out and see Hell or High Water. It’s one of my favorite movies of the year. 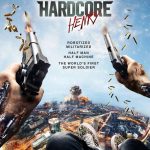