The last film Stefan Forbes made was his 2008 documentary Boogie Man: The Lee Atwater Story and although it has been a long gap between movies, it’s worth it when the result is his spectacular new documentary Hold Your Fire. The setting is 1972 Brooklyn, New York, where three men robbed a sporting goods store, which turned into people held hostage, and a standoff with police. Forbes tells the story from all sides, with footage from that shocking event, interviews with police officers, hostages, and the men in prison serving time for their crimes. But there’s much more to the story and Forbes digs into what police and people must do to change the way we handle these situations, the way our criminal justice system is working, and how we get to the roots of the proper approach to mental health in this country. I was able to interview Stefan at the Chicago Critics Film Festival and go over what inspired him to make this powerful documentary. Watch it here:

Hold Your Fire is playing in select theaters and On Demand May 20th, 2022 from IFC Films. 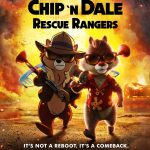