I don’t know what to say about Lamb. I’m honestly processing this movie through writing my review, something that I typically don’t do, and that’s because processing Valdimar Johannson’s directorial debut is not easy to process at all. The first thought I had was “what the hell did I just watch?” The second act was to talk it out with my wife Christina, because even she was left stunned by it all. I think I have many ideas about it and judging by that rating above, I am a big fan of this film, which is visually stunning, perfectly acted, and so unique I have to appreciate it. The premise of Lamb is about a married couple in the countryside of Iceland, living on their quiet farm with goats, rams, lambs, cats, and a dog. Things are quaint and calm, until there is a baby lamb born, which for some reason becomes a special animal to this couple, treated as a chosen one and cared for as if it was their own child. Life becomes distorted, haunting their days and nights, and the closer they become with the animal, the further they get away from reality. Lamb is an entirely different animal.

The couple is Maria (Noomi Rapace commanding every scene) and Ingvar (Hilmir Snaer Guanason), both calm and collected in their work, feeding the flock of sheep, grooming the land for fruitful returns, and delivering baby sheep when they arrive. They prepare meals together, sit at the dinner table and chat about fun subjects like time travel, and go to sleep after a long day of work. What’s evident in the first act of Lamb is that there is a missing presence and an empty crib next to the bed. Where not sure if the couple cannot have children or have lost children, but it’s something that lingers behind the eyes of Maria, wanting that one connection that she’s never had. After a few baby lamb deliveries, we witness a third, and it’s this one that Maria wraps in a blanket, bringing it into the house and giving it the kind of care she would give her own. What follows is the heartbreak of the mother sheep that had the lamb, calling for it’s child, which is a reminder that one living thing’s gain is another living thing’s loss. That seems to be a major theme in Lamb.

In the second and third acts, a third character enters the story, when Ingvar’s brother Petur (Björn Hlynur) arrives unannounced, after being abandoned by a group of disgruntled friends. He instantly realizes that Maria and Ingvar have created a connection with this animal that is unhealthy. It’s also revealed later that at one point Maria and Petur had a past, which is an added sense that Maria has regrets, and the conflict of being married to a man that could not provide a child, while the other one might have been. Again, these are all just theories I have thought of, hidden meanings, or deeper reaches I am making with the screenplay from Johannsson and co-writer-Icelandic poet- Sjon. The themes they are digging into are clear, it’s just not exactly spelled out, nor is what the characters experience entirely making sense. You add that with the gorgeous visuals and Lamb becomes a fascinating experience to have.

If there are at least two clear parts about Lamb, it’s that the cinematography by Eli Arenson is stunning from start to finish, and that Rapace delivers a performance carrying it all. As for the cinematography, it’s not just about capturing the gorgeous landscapes of Iceland, but framing shots that say more than dialogue or development. It’s the isolation that feels real and we see that power of loneliness emanating from Rapace. She screams with madness at the sheep that follows her child, she has a cold stare when Ingvar attempts to make love with her, an act that seems futile at this point, and she emotionally changes the view of what it means to be a mother. Is the answer becoming one by any means necessary? Is the desperation and the depression worth it for the pain in the end? These are questions you leave asking with Lamb.

All of these reasons make it incredibly difficult to recommend Lamb, simply on the fact that it’s wildly abstract, creating visuals that will haunt the mind, and change the viewpoint for anyone that wants to have children. It’s obvious Johannsson was inspired by the likes of Kubrick, Ingmar Bergman, or Lars von Trier and that’s not a bad group to take from. But in regards to what it all means or what Lamb can do to the audience, this is a masterful, precise, and successful piece of cinema, not for the easily dismissive. There’s a lot to process, with debates about what parenting should look like, how to keep a happy marriage, and how Noomi Rapace reminds the audience that she’s one of the best actors today. Her performance here is mastful, which takes a lot of ingenuity, the calming grace of a mother, and the soulless sense of someone willing to do it all for her way. Those are just a few of the things I have gleaned from Lamb. It’s a movie that has to be seen again and again, discussed long after, and taken in with an open mind. Don’t be sheepish to see Lamb. I’m excited to know what you think about it…If you can understand exactly what it is. 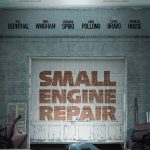 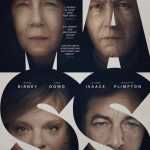