I absolutely love it when a movie is smart. Not just an inventive narrative or something new, but something that proves how talented a human can be. That description fits Natasha Kermani’s Lucky, which is written by, and starring Brea Grant, a star in the circles of the horror genre, but so talented in other ways that she won’t be pinned down. At first you think this might be another Groundhog Day-type movie scenario, where a woman is experiencing the same day over and over, only this day involves a man that breaks into her home and repeatedly attempts to kill her. That’s only slightly true, because a man is continuously breaking into the home, but the days change, and the man keeps coming back prepared to kill her. With each day, the scenario changes a bit and Lucky is not just a gimmick picture, but an inventive observation about survival, mixed with a bit of science fiction, and the gender politics of what it’s like to be the hunter or the prey.

I could dedicate my entire review to the impressive abilities of Brea Grant, but I will save that for later. Her character is May, a writer of self-help books, living with her husband Ted (Dhruv Uday Singh), doing book signings, and looking for inspiration to write her next book. Things change at night when she hears a noise while in bed and sees a man standing outside. She becomes confused when Ted wakes up, unfazed and already aware that an intruder was there, almost like he knew he arrived every night. What follows is a repeating trend, each night May is visited by a masked assailant, sometimes she succeeds at striking the intruder, cutting his neck, or hitting him in the head with a bat, but each time his body instantly disappears. Why is this happening and how can May make it stop? That’s the mystery.

Judging by movie stills and the fact that Lucky is premiering this week on Shudder, I couldn’t help but expect something a bit more slasher or B-movie stylings. But Lucky is incredibly smart. Director Natasha Kermani does an excellent job of building the narrative up, with each intrusion a bit different from the last, and keeping our lead character isolated in her experience. The genius of Lucky is the screenplay by Brea Grant, who has found a way to tilt the Groundhog Day style narrative on its head, and send the audience down a rabbit hole. When we finally get to the metaphor of Lucky, the narrative takes a turn causing you to evaluate everything that came before.

That’s ultimately why Lucky’s main praise belongs to Grant. The actress from The Stylist continues to amaze, playing her character on the edge, where we can see her wheels spinning in her rightfully confused head. She sees the same police officers show up for a statement, not fully believing her, wondering where Ted has gone, and what she ever did to deserve this existence. There’s the brief release of bloodshed, which helps, but Lucky walks the line of the surreal and subtle metaphors of the female experience.

With films such as I Care a Lot or Promising Young Woman revealing a recent narrative trend on revenge dramas, Lucky feels like the one that is trying to be smarter than the others. It nearly succeeds, where it may take a bit too long to get to the messaging, but it’s entirely worth the revealing climax. Brea Grant is an incredible talent and her acting skills deserved our attention yesterday. Through her performance and sharp writing, Lucky is a creative new way of telling an audience what it feels like to experience trauma, to not be believed, and to not have a way out. It probably should be called Unlucky, but getting the chance to see this movie makes us the Lucky ones. 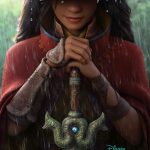 Raya and the Last DragonReviews 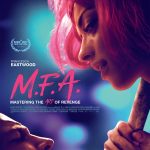