The month of January typically produces movies that ease us into a new year of cinema. Low-budget horror or cliched comedies fill up screens, while leftover Oscar hopefuls look to gain traction from recent awards recognition. Underwater is neither of those three types of movies, in fact it seems to have a larger budget than most sci-fi pictures in recent memory, but it also won’t be remembered in a month. Director William Eubank (The Signal) is looking to make an aqua version of Alien, where a crew on a deep sea drilling station become under extreme duress from an earthquake or a possible monster that has awaken. When you try to stand on the shoulders of the great, tight spaced sci-fi horror films, you better bring the goods. Underwater brings a little bit of that, combining strong set design and special effects, along with a story that becomes murky along the way. Underwater is not a movie you dive into, but maybe you dip your toes.

The screenplay from Brian Duffield and Adam Cozad is more interested in getting the action moving than explaining to us who the characters are. Kristen Stewart stars as Norah, who starts things with a voice over, telling us where her head goes when being under some 7,000 feet below for months at a time. As she exits the shower area in the station, water starts to leak from the ceiling, a loud bang, a big crash, and the entire station starts to cave in on her. The race is on for survival, with doors collapsing everywhere, separating her from the destruction, and along the way we meet other crew members, all trying to survive whatever it was wreaking havoc. Mamoudou Athie’s Rodrigo is the first crew member she saves, followed by T.J. Miller as a dopey comic relief guy sporting a tattoo on his chest. The three make there way to safe portals, where we’re introduced to the distraught Captain (Vincent Cassel), new girl Emily (Jessica Henwick) and her engineer boyfriend played by John Gallagher Jr. Now that the crew has found one another they must devise a plan, one which involves going into the water, along with the threat that is out there causing the destruction. It’s not just the monster that could get them, it’s the elements that become even more of a danger. Loss of oxygen, air pressure, and explosions- all possibilities in the deep dark sea.

When the plot for a movie like this is painfully predictable, it’s a good thing to have Kristen Stewart as your lead, plus water suits that look incredibly similar to the Moebius drawings that inspired Ridley Scott for Alien, and sets with walls that keep tightening on us like a sardine can. The creation of claustrophobia from Eubank is the films best aspect, but when crew members get out into the water, things become visually ugly, and almost impossible to see what is going on. It also might be silly to say, but the action becomes incredibly unbelievable, with explosions that should leave characters dead, and a monster that deserves more screen time than it gets. When the monster becomes more visible, Underwater finds focus, but is still too preoccupied with the water surrounding and not enough attention to the humans trying to survive. Surprisingly, Underwater is a movie that grasps the monster stuff, similar to last years Godzilla: King of the Monsters, where that movie faltered in spots, it is the sheer scale of it all that makes watching it more than entertaining.

Underwater just is what it is. A deep sea disaster picture, with a handful of characters that don’t really matter- T.J. Miller is incredibly annoying in this thing, and a monster reveal that is at least something of their own. The beginning is entertaining, the middle is a bore, and the end leaves you wanting a bit more. It’s not a bad way to start things off for 2020. I just hope the next movie can swim a bit better than this. 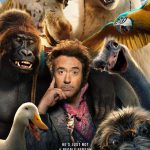