The Broken Circle Breakdown never pulls punches when it comes to telling the complex realities of life that exist in the films story. Director Felix Van Groeningen directs a film that pulls us in multiple, emotion filled directions. And, as the viewer, we must settle with that reality somewhere in the middle. Somewhere in the middle is an answer. It is the story of Didier (Johan Heldenbergh) and Elise (Veerle Baetens), a couple that did not expect the addition of a child in their household. They experience a reality check when that only child is diagnosed with cancer. The Broken Circle Breakdown is a good film with a heavy subject matter that weighs the viewer down, but overcomes with a strong narrative.

Surrounding our two main characters relationship are questions of faith, love, family, and the afterlife. Didier is a banjo player in a bluegrass country band. He meets Elise, a tattoo artist who could tell you her life story in her multiple badges of ink on her skin. She watches Didier and his band perform, as she stares in awe at him on stage. The two fall in love, get married, and Elise becomes the bands lead singer. It is evident that the band is not just a passion, but a family. Friends gather to sit by fires and sing gospel songs. Meanwhile, Elise and Didier are madly in love. They make love in fits of passion. They make love so much that Elise becomes pregnant. It is a shock to Didier. He reacts as if his freedom has been taken from him. And then he puts himself together to build his fixer upper, because a baby is on the way.

What is mixed between the scenes are performances from Didier and Elise’s bluegrass band. The film is in Belgian language with English subtitles. But, the music is sung in English and performed to perfection by the cast of characters. The films score is melodic beauty. Like films such as Inside Llewyn Davis or Walk the Line, the beautiful music is sweet while it lasts. It is an escape for Didier and Elise from the heavy doses of real life. Little Maybelle (Nell Cattrysse) is born and is the apple of her parents eyes. When she is diagnosed with cancer it is only the music and her unwavering optimism that keeps the hope of all those around going.

During these scenes of Maybelle’s cancer treatment, this is where we feel a tsunami of emotions. Scene after scene takes us through some of the painful to watch treatment sessions. As days roll on it is we the viewers who are left helpless. Didier and Elise watch in pain with tears in their eyes. And we are left helpless, just as paralyzed. All we can do is ask why?

One day when a bird flies into the side of one of the windows on their houses outdoor veranda, Maybelle cannot understand why things have to die. Neither does Didier. All he can say is that “things just die”. When adorable Maybelle explains to her father that she believes the bird became one of the stars in the sky, he does not see the point of believing this. This is somewhat an example of what Elsie believes in her own ways as well. It is not that Diedier is an atheist, but he sees himself as a realist. Someone who believes in the beauty he can see with his own eyes. It is the many questions of life that will be asked of this family to answer. In the end I am not so sure these questions will ever be answered. Doubt will always exist, but in the subtle minutes of peace, there is the beauty of life.

As the story goes on the relationship between Diedier and Elsie becomes a struggle. During their heated arguments, one thinks of Derek Cianfrance’s 2010 film Blue Valentine. It began as a passionate love against the world type relationship and slowly deteriorates into a relationship of broken pieces left. The viewer is given an outside look at a love that began as beautiful and turns to something unrecognizable. As the film comes towards the end it is the final results that the audience must experience. It is something that I cannot tell you.

The Broken Circle Breakdown is a well done film. What weighs the film down is the heavy subject matter. This is not a film to put a viewer in an uplifting mood. But, there is an interesting contrast of gorgeous bluegrass tunes and authentic life problems. This is an all too real example of the highs and lows of being alive. It opens with an uplifting gospel song and ends with an uplifting gospel song. Everything else in the middle is just life. It is never easy to deal with loss and love. Then again these are all the reasons why life is so unique. Life certainly is beautiful. Complicated, but beautiful. 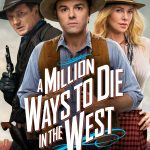 A Million Ways to Die in the WestReviews